i love analogue delays! for me, they are a big part of the magic in electronic music, though i never owned one until very recently and thats why i am so happy to write about this latest purchase.

it is an Inkel mx991 analogue mixer with analogue echo (which was the reason i bought it in the first place!!) 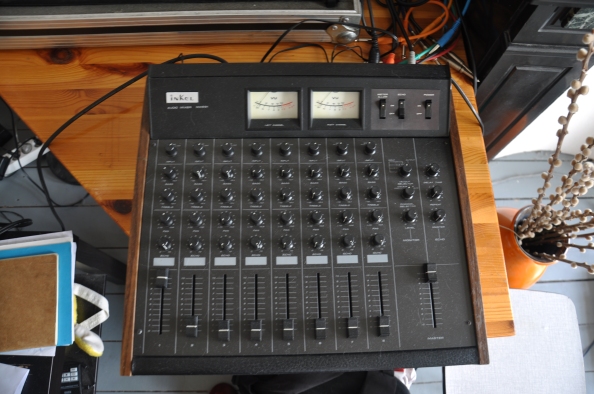 the purpose was (and still is) to modify the mixer’s delay module and turn it from a shy little echo into a super psych analogue delay galore, and use that monster as a mixer/delay base for a modular synthesizer i am planning.
i managed to achieve all of the above and even more (i discovered a few very nice things in the process) with the genius help of electronic whiz, STU (1, 2), and i am going to go through the mod procedure here (since its very simple to make) in case anyone out there has this mixer and would like to hack it.

so, on the picture above you can see (from left to right) the 8 channels of the mixer, then some monitor output selector section and right after that, on the most right, the delay module.

below you can see a close up image of  the mixer channels as well as a (blurry) close up of the delay module controls: 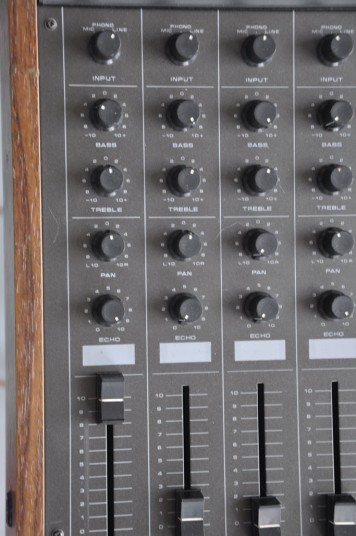 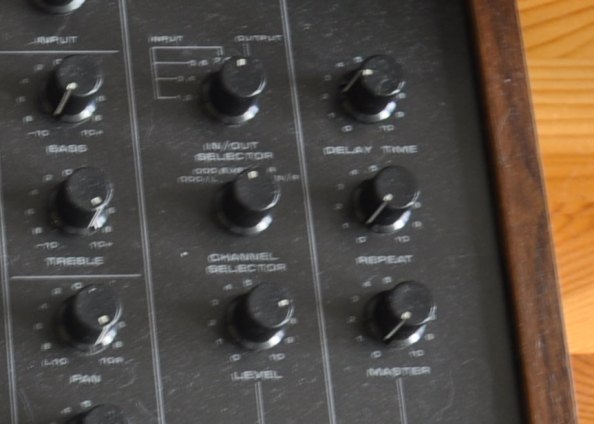 each channel has an input selector (line, mic and channels 1-4 have phono as well!), basic eq, panner and an “echo” knob.
the delay module has control over delay master volume, repeat (very limited feedback) and delay time.

anyhow, i’ve made some silly demo recordings of an mc-202 note running through the mixer-delay before the mod was applied, just to give some sense of what it sounds like before (and after) the procedure. the recording sounds lame but those of you with an ear for this stuff will recognize the potential immediately!

in the recording you can hear the clean note at first and then slowly the cranking up of the “echo” knob on the specific channel. in the beginning the echo is set to “repeat=0” so there is only one delayed repetition. next, i crank up the repeat knob slowly to maximum and then i start twiddling the “delay time” knob (thats when the nice pitch shifting appears).
this is all very nice but extremely limited.

now, in order to make this polite module into an aggressive delay, what STU and i did was to sacrifice channel 1 (it has to be that specific channel) and use it as an additional feedback to the delay module. at first we thought we would have to hack the circuitry of the mixer. we opened it, checked the circuit and the wiring inside… even burnt the main delay chip in the process and had to order it again! only to discover that we can do this without any solder or complicated circuit bending!

opening the mixer is unavoidable (click on the image to enlarge). 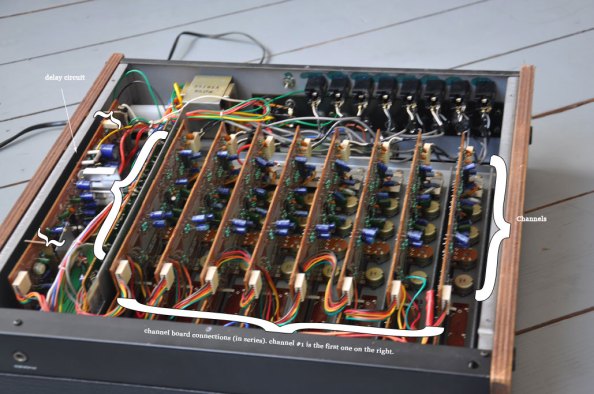 after unscrewing the bottom panel you will see the mixer just like in the picture above. we have to disconnect the left and right outputs from channel 1. notice that the channel outputs are connected to each other in series (the colorful wires at the bottom of every channel strip) whereas #1 is at the end of the line. that means that if we choose to disconnect any other channel besides #1, all channels before it will be disconnected as well (if we disconnect #4- #3, #2 and #1 will be automatically disconnected as well).

we disconnect the L and R output wires for channel #1 by either pulling the right wires out of the white cap (each channel has one to connect the colorful output wires) or simply cutting them. in my mixer, the L and R wires were yellow and orange.
the white caps are easily pulled out of their place and the channel boards has markings to show what wire belongs to which output signal. 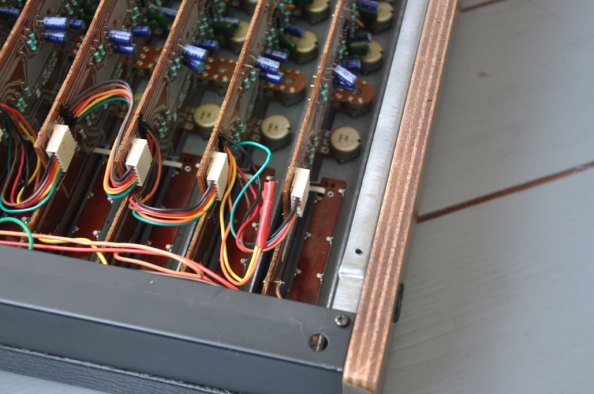 that was the “complicated” part. the bottom panel of the mixer can be put back. the next step is simply to connect the mixer’s aux output to the input of channel 1.  the aux outputs are RCA connectors. channel #1 has 3 inputs: line, phono (both RCA) and mic (Jack). i connected a stereo RCA cable from the aux output to channel #1’s line and phono input.
that’s the whole hack.

to overview what we did: we disconnected channel #1 from the “dry” signal flow (but notice that the echo signal is still connected!) thus by feeding a signal through it, that signal is only being sent to the delay module and then back to channel #1 through the aux outputs to create feedback! thats all.

we got a few of the extra features besides this additional feedback boost:

so eventually, what you get, after this whole process, is a multi-channel distorted/ filtered delay device!

one important note: the delay feedback is now being controlled via channel #1’s volume slider and echo knob. the repeat knob on the actual delay module must be set to minimum in order for this hack to work. if you try setting it higher, the end result will be the same old polite echo we had before the hack. for some reason the repeat knob on the delay module cancels the effect of our hack.
from this point, the only thing left is to play around with the master volume, master delay knob, channel #1 volume, channel #1 echo knob and of course, the delay time knob and feel how to balance your way with this new instrument.

here is a sound sample of the same mc-202 note fed through the modified delay. I start simple and slowly crank up the beast:

i didnt play with the distortion inputs much here, only with self oscillation, which is achieved pretty fast but i am sure that soon enough plenty of music will be posted in this blog with examples of that feature.

i simply love this machine. it has 7 channels of dirt and texture that blows me completely away (i think i can also cancel another channel and have a stereo delay as well! need to check that one though…)! i recommend anyone who have access to one (very common in north-west europe i hear) to get it now! they come in ridiculous prices. i paid for mine 40 Euros. pretty cheap for a ride to outer space!